Home » What Are The Best Fillet Knife Sharpeners On The Market In 2022?

A fillet knife is (obviously) a knife used for filleting (cutting a fish in a way that removes its bones). A sharpener for fillet knives isn't just a plain sharpening stone. You need a special tool for the job. With that said, what's the best fillet knife sharpener out there?

A Guide To Shopping For Fillet Knife Sharpeners

When attempting to make an educated decision in getting the best fillet knives sharpeners for you, you need to become aware of what filleting entails. To wit:

Here are the three types of fillet knife sharpeners.

These sharpeners use a 2-3 step process of honing, sharpening, and creating the edge of a dull blade or even a raw hunk of metal. They first use a coarse grit in order to sharpen the dullest of blades. After that, there's a midway grit then a fine grit to hone the already sharpened blades.

It spins its sharpening stones as the knife is drawn through its slots. It sharpens at the desired sharpness and you can sharpen it further a little if you're not satisfied with the initial pass. Most importantly, an electric fillet knife sharpener takes out the tediousness of sharpening knives while at the same time producing precise results (especially with knives as thin as fillet knives).

A carbide handheld fillet knife sharpener requires you to manually sharpen the knife with a handheld tool. It simplifies the sharpening processes, you won't have to deal with batteries or electric sockets, and you mostly depend on your dexterity and muscle memory to perfect the skill of knife sharpening.

A handheld knife sharpener has the advantage when it comes to portability. Many fishermen take them along on their fishing boat because of their ease of operation and small size. A handheld fillet knife sharpener has fewer slots to work with, though. Depending on its design, you can either draw the knife through the slot to sharpen it or draw the tool onto the knife as it's placed spine-down on the countertop. 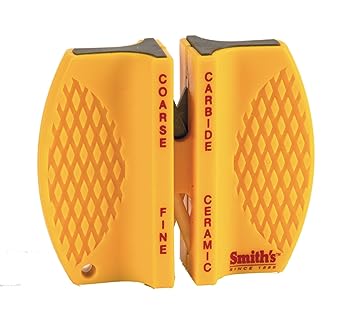 With that said, standalone manual smith's fillet knife sharpener actually benefits from being cheap yet cost-effective. It rates higher than the Ofcose knife sharpener on this list because even though Ofcose buyers rated it highly, more users got to try out Smith's sharpener, so there's a wider pool of people vouching for it even though it has a lower score than Ofcose. It justifies its score with its present sharpening angles and crossed ceramic rods.

Also, it's capable of sharpening more than just fillet knives and it shares Ofcose's no-slip rubber feet feature as well to make it safer. Actually, even though it's a multipurpose sharpener that costs less than a Happy Meal, it specifically caters to fillet knives as well. In the end, it's a must-have for hobbyists. 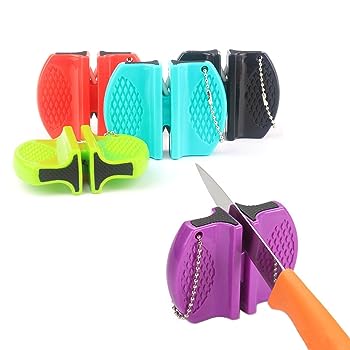 This is a highly rated manual knife sharpener. You read that right. It's not just a sharpener of knives in general but the set can also sharpen fillet knives specifically. Unlike the more complex electrical sharpeners, the ofcose fillet knife sharpener is a two-stage sharpener.

It claims to produce professional results, it's easy to use from what I've experienced, it comes in multiple colors, and it features a crossed carbide blade to allow for quick edge grinding, resulting in a razor sharp edge every time. It's a great sharpener for what it is and what it figuratively and literally brings to the table.

It also has a no-slip rubber base on both sides for easier grinding and sharpening. It also has a hole for a hanging chain or lanyard. It even has enough control to do quick touchups on already sharp knives, making it useful for the kitchen and the outdoors. In terms of downsides, it's mostly of the quality control variety. 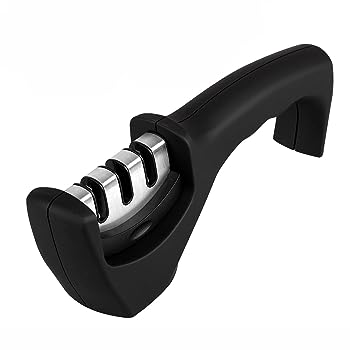 Here's another multipurpose knife sharpener that includes 3-stage sharpening instead of just 2 stages or steps, making it more thorough with its sharpening (but it also means it's more expensive). It's good for sharpening fillet knives, which is the important thing.

Furthermore, it can also sharpen pocket knives, carving knives, combat knives, and kitchen knives. Its three stages are like the different kinds of sanding stone. You have the ceramic sharpener, the coarse sharpener, and the fine sharpener. It's also made of ABS plastic for extra durability.

Aside from its 3-stage process, it prevents accidental cuts due to how the rubber base is fitted with the sharpener as well. So how come the gelindo fillet knife sharpener is only third ranked on this list? It's because it's a flawed product. Even though it has a great build quality, there are complaints about its effectiveness with ceramic knives. 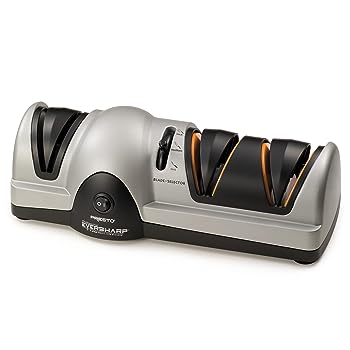 It features 3-stage sharpening just like Gelindo that's easy to use and it's really fast when sharpening these knives precisely. It also has interchangeable blade guides for optimum sharpening angles every time. However, you need to troubleshoot it from time to time and there are complaints about some defective units not being able to sharpen knives at all. 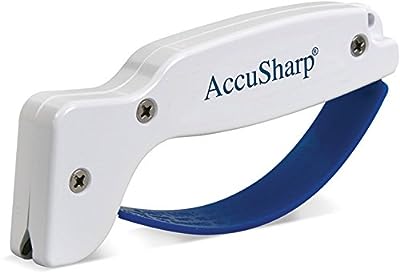 The fifth of these top 5 knife sharpeners made it to this list because it's made in the USA (which has higher standards of quality control) and its sharpening blade is made of diamond-honed tungsten. Your fingers are also protected by its full-length guard.

What's more, its blades are also reversible. It's particularly excellent for those who have no idea how to sharpen knives. It will do all the work for you, like an electric (pencil) sharpener of sorts. It's even dishwasher safe (which you can't say the same for any and all electric knife sharpeners)! However, the accu sharp fillet knife sharpener isn't perfect.

Even with its improved quality control (making it a must-have in every anglers' tackle box), it still has issues concerning going overboard with putting the razor edge on your fillet knives. It's not the best knife sharpener on this list because it's known to ruin knives.

It's now possible to sharpen your fillet knife in just a few minutes though. Or in 90 seconds flat (which is exactly a minute and a half) with the assistance of electric fillet knife sharpeners. You can leave the knives alone, sharpening them 90 seconds every time while you have your fishing line cast and your other hand is drinking a cold beer.

In conclusion, which is better? In their own ways, an electric and manual fillet knife sharpener can give you a minimum amount of fuss. The electric sharpener makes sharpening faster and the stone sharpener doesn't really break down as easily and it doesn't run out of battery juice (or need batteries at all).

The people of the past kept a slower pace and there's less urgency when sharpening their fillet knives. Or they'll make do with a dull knife until it absolutely requires filleting, since he probably uses sharpening stone fillet knife sharpeners and loads of free time to sharpen the knife by hand. The simplicity of the past remains relevant in present times even with the existence and availability of electric knife sharpeners.

At any rate, the best fillet knife sharpener in modern times isn't an electric one but a manual one, and it's the Smith's CCKS Knife Sharpener. The other sharpeners might do the job faster, but in terms of longevity, it's a marathon not a sprint with the 2-stage sharpening system of the portable sharpener. It also helps that it's dirt cheap. Once again, economical utility triumphs over expensive convenience and luxury. 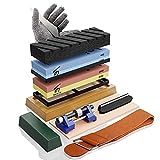 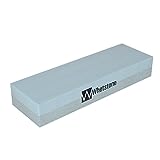