The Best Japanese Water Stones For Your Needs

Your Guide To Buying A Japanese Whetstone:

Here are the things you need to be looking for when shopping for Japanese whetstones.

You also want a product inspected by reputable third party inspection companies, whether they're made in Japan (the most genuine of Japanese water stones) or in the USA. Each package and stone should be checked and put under a battery of durability and functionality tests before they even reach shelves or warehouses. The best Japanese waterstones are the ones that can be used by both professionals and housewives because of its consistent performance. It also doesn't hurt if the stone is award-winning or branded.

As far as Japanese waterstone sharpening is concerned, the best quality whetstone packages allow for multipurpose use. You want a professional-grade sharpener that's long-lasting, highly durable, and doesn't arrive right off the package as cracked or hollowed out (used). It should also be a water stone that can sharpen a whole host of knives by being at least 8 inches in length. It should sharpen kitchen knives, hunting knives, pocket knives, scissors, chisels, Wushtofs, razor blades, and even axes.

To save money, it's preferable to avail of your Japanese water stone as bundles or knife sharpening kits that include double-sided whetstone blocks with different grit grades on either side or an outright Japanese waterstone wheel (a great axe grinder for sure), a bamboo or silicon plastic base for holding the wet stone as you sharpen the knife, and a knife sharpening angle guide. I actually gave minus points (along with other reviewers) on packages that lack instruction manuals since not all people know how to use a waterstone properly.

Safety is always a concern. That's why your oriental whetstone package should come with a bamboo or silicon (any waterproof material) base that holds the stone without it slipping away. Get your water stones fixed in place while sharpening. You'll feel like Sisyphus rolling that rock over a hill tediously if your waterstone keeps slipping from a badly designed base, plus you increase the likelihood of you accidentally cutting a finger or palm.

The ease of use that you can get out of your Japanese water stone depends on its quality (so that its defects won't make it a chore to use for sharpening your different blades) and on the instructions included in the package. The Japanese water stones best packages include a knife sharpening angle guide that allows you to maintain the correct angle in sharpening, which in turn enables you to apply constant and consistent pressure while sharpening whatever blade you have on hand. Your Japanese whetstone should also be easy to assemble and user-friendly.

When it comes to using a Japanese waterstone, rest assured that it's an easy to use blade sharpener once you know how it works. Just soak it in water for 20 minutes then moisten it up as it dries out afterwards with a half-dozen passes from a wet rag. From there, it has enough slurry to effectively sharpen up the edge of any knife. This is just an overview though and there should be instruction manuals present to outline a more details approach. Just wash off the sloughed off metal on the stone when you're done sharpening your blade.

In regards to Japanese waterstone vs arkansas stone, the Japanese whetstone can only work with water in order to create that slurry that sharpens your blade. It's also easier to clean up with water as well. With an Arkansas stone, it uses both water and honing oils in order to do the same effect (so it's not strictly just a whetstone but also a stone that works with oil). Also, oil is preferable for Arkansas compared to water in terms of lubrication, which can be messy to deal with at times. That's the bottom line when it comes to Japanese water stones vs. arkansas stones.

Natural water stones from Japan tend to dish faster and have a softer feel to them since they occur in nature. They also vary wildly in quality and character. When you decide to do a Japanese water stone buy out or shopping expedition, look for the best ones because they polish your knives in a manner that manmade stones cannot. They also require more finesse in order to be used properly, so they're the top choice of chefs, veteran housewives, and professional knife sharpeners.

Synthetic Japanese waterstones are more automated and uniform. They're the choice of inexperienced housewives, novice chefs, or any amateur who has never sharpened a blade in all his or her life. Their predictability and consistency allow you to end up with a good (or passable) knife sharpening result every time even if you're a beginner user of stone sharpeners and they're typically of the 1,000-grit to 6,000-grit variety.

There are different Japanese waterstone brands to choose from. Choose carefully. 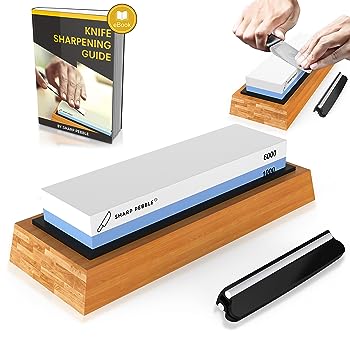 This wins the top spot on this top 5 list because it's a package deal where everything I was looking for is available. It has a bamboo base for holding the stone, an instruction manual, a guide for knife sharpening angles, and premium-quality double-sided whetstone.

It even has an eBook with loads of tips and tricks when it comes to using these waterstones to their utmost potential regardless of your knife sharpening experience and skill level. The Japanese waterstone mighty dreams is a multipurpose kind of package that includes a sharpening stone with fine 1,000 grit and extra fine 6,000 grit. However, it has received complaints of being too soft and unable to keep a flat face.

From what I've experienced, the stones from Mighty Dreams are quite safe, easy to use, and high quality. It's also dependable enough to be a Japanese waterstone axe sharpener. However, despite its high scores, it has issues with quality control. Some buyers have received packages with low-quality stones although they did like the bamboo base a lot. Others had issues with the softness of the stone to the point of requiring constant resurfacing. 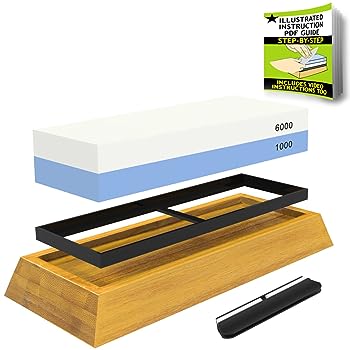 This stone package comes with a 2-sided pro-grade Japanese-style waterstone blade sharpener featuring 1,000 grits on one side and 6,000 grits on the other. The Japanese waterstone culinary obsession also includes easy video instructions, an angle guide, and a non-slip base.

It gets the job done when it comes to sharpening knives with its combination grit whetstone that has an extra wide sharpening system to keep a variety of knives razor sharp. The Japanese waterstone kit also makes it easy to learn how to use it with an audio-visual presentation of an instructional video to round out the deluxe kit that even includes a no-slip bamboo base.

In light of how close its offerings are to the Mighty Dreams stone (it even has a video, which is superior to an eBook instruction manual), why is it ranked lower than the other stone? As you might suspect, its score was dragged down by quality control complaints wherein even the video wasn't enough to make it score higher than the "simpler" package of Mighty Dreams. 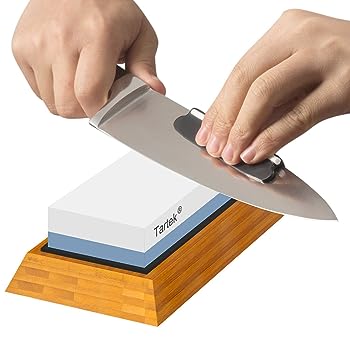 The third best waterstone on this list is a whetstone that also includes an angle guide and a non-slip base (yes, there is a pattern of excellence being established here). The Japanese waterstone tartek has a similar double-sided grit stone, one with 1,000 grits and the other with 6,000 grits.

It's great for blade maintenance or even edge creation from dull blades (it just takes longer because it lacks a coarse-grit side or stone like with Culinary Obsession and Mighty Dreams). It ticks all the boxes when it comes to Japanese whetstones, so you're probably curious why it's only the third best knife sharpening stone on this list.

For one thing, Mighty Dreams has a stronger consumer base compared to the less popular Tartek. For another thing, Culinary Obsession has a better instruction video package compared to the barebones offering of this product (no manuals to speak of). Finally, its score got dragged down with poor quality control. Some units don't sharpen at all. 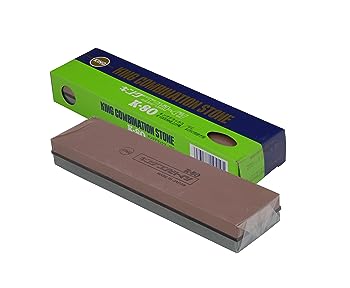 This Japanese waterstone features a 250-grit side (a rough and coarse stone for sure) for creating edges and making the dullest blades sharp. Its other side has 1,000 fine grits instead. The Japanese waterstone king also has the size of 8 inches by 2 inches by 1 inch and the fact that it's two stones in one helps you save money.

It's a Japanese waterstone from japan that's really affordable and sharpens quite effectively. It's particularly skilled in sharpening out your chisels if you're a woodworker. Just use the Robert Larson Honing Guide to help you run on the right track (not included with the package, of course). Alas, other than having a rough grit, there's nothing much to be said about the King waterstone.

What's more, it has a rougher grit available unlike the top two that have only fine grits. However, due to its lack of instruction manuals and defective units, it has landed on fourth place on this top 5 list. The other two, even though they're specifically just for fine sharpening, have fewer complaints about them. 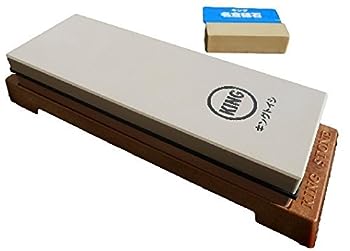 This is yet another king Japanese waterstone package, but this time around it's more complete. It has a combination grit 1,000 and 6,000 stone that's double sided plus it also includes a Nagura stone that's extra fine with its 8,000 grits for good measure. The two-in-one stone measures 7.5 inches by 2.5 inches by 1 inch.

The Nagura stone, meanwhile, is a smaller stone measuring 2.8 inches by 0.8 inches by 0.9 inches. It even includes a plastic stand for the double-sided Japanese whetstone as well. The bamboo base of the earlier products is more fetching than something made of plastic (which I feel cheapens the unit). It's still an excellent enough Japanese waterstone sharpening kit all-in-all.

So why is the most robust package that's a genuine Japanese waterstone (because it's made in Japan) dead last on this list of excellent whetstones? For one thing, the Nagura stone doesn't add much due to its smallness in size. For another thing, there are reports by users of them receiving stones that are cracked or damaged right off the box, which dragged its score down.

You want a water stone that has multiple uses on different blades (whether they're axes, razors, chisels, scissors, pocket knives, hunting knives, or kitchen knives). You should also look for a perfectly safe stone that doesn't crater easily after extended use. The best of the best Japanese water stones is Mighty Dreams Premium Knife Sharpening Stone. It's a superior bundle of sorts because it comes complete with an eBook, instruction manual, and sharpening angle guide on top of a useful bamboo base and a two-sided quality whetstone with 1,000 fine grit on one side and 6,000 super fine grit on the other side. The other whetstones don't even come close.